Share All sharing options for: Eater Louisville Launch Party at Proof on Main

As noted social critic and occasional instigator of attempted genocide Eric Cartman once observed, "More people will come if they think we have punch and pie." So when the punch is Woodford Reserve cocktails and the pie is passed appetizers (the tobacco duck was like crack for your mouth), stations and a gelato cart from Proof's Levon Wallace and his team, it's no surprise so many people turned out. Thanks to Proof on Main, Woodford Reserve and everyone who attended, as well as the media member who had to cancel because "my cat had to get an enema." (In a related story, the gal who owns that feline is still on the market fellas.)

·Mayor Greg Fischer (who, to answer the most common question of the evening, did enjoy a cocktail)

·102.3 FM The Max's George Lindsey— who graciously invited this editor on his show the following morning to talk about the site and launch party

Bloggers rarely leave their parents' basements, of course, meaning many of you are easier to recognize by your email address (or you didn't check in, so it wasn't possible to pluck your name from the attendance list). So if you're a kind of a big deal but weren't mentioned, sorry, but feel free to name check yourself in the comments. 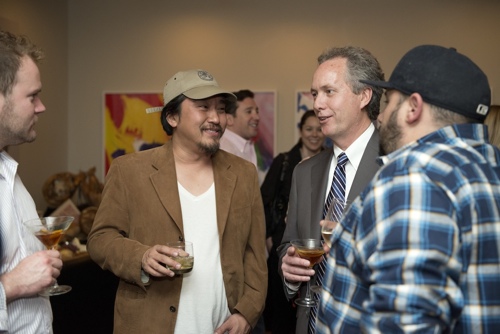