Share All sharing options for: Main Street Cafe's Laurence Agnew on Year One

Welcome to One Year In, a feature in which Eater sits down for a chat with the chefs and owners of restaurants celebrating their one-year anniversary.

In October 2012, chef/owner Laurence Agnew converted his Main Street Coffee and Deli into Main Street Cafe. Focusing on locally roasted coffee and sandwiches made with house-cured deli meats, Main Street Cafe recently picked up its liquor license too. Here, Agnew talks about adding a wait staff, his plans for pop-up dinner service and what it's been like to be one of the first restaurants to open in the East Main District.

What's the first year really been like for you guys?

The first year's been, of course, always interesting. Being in kind of a new area of downtown, our challenges were really getting the word out about Main Street, letting people know that we're here. And opening seven days a week, that's kind of helped it along. It's been a lot of fun though and we've come a long way. We're starting to get a following. It's definitely been a good year for us.

We were originally more of a deli/coffee shop and we found out that the coffee wasn't really taking off the way we'd like it to. And at the same time we wanted to have more of that kind of restaurant/cafe feel, come in sit down. That way we could kind of tie into brunch on the weekends once we got our liquor license.

Did you guys just get your liquor license, is that correct?

What do you plan on doing now that you've got it?

I've created a menu with of course wine, sparkling wine and then we do cocktails. We have our Main Street Mary, which is kind of a classic which we make our own base for. We make a Main Street Smokey Mary which is kind of based on the Bourbon Barrel Food smoked paprika and hickory smoke that we actually put in the drink and we make that one with bourbon.

Have you changed your hours at all?

We haven't yet, we're looking into doing some nighttime service as well. Towards the weekends, kind of a Thursday-, Friday-, Saturday-night set up and do a little bit higher-end food.

What were some of the biggest challenges going from the coffee and deli to the cafe?

The rebranding, so you don't confuse the clientele. When we had the walk-up counter service, there really weren't any servers involved. A lot of processes are put in place once you have servers. That kind of table service ties in to those little details that you don't necessarily come across when its a walk-up counter.

What's it been like operating on weekends downtown, obviously a lot of the business community is gone during those times? What have you done to try to get diners in there? Or are people just kind of going downtown now?

Well we're starting to see that people are more apt to go downtown, with us being kind of the first ones in what they're calling the East Main District now. But, its kind of the same thing they maybe came across when NuLu was first starting four or five years ago. We're partnering with a PR company and getting the word out that way and then really using social media as much as we can to get a following there. 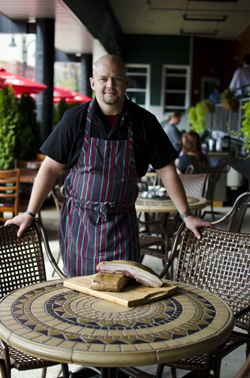 Would you have done anything differently in your first year?

I don't think so. I think we definitely would have pushed more on the boxed lunches, which we're definitely pushing hard on now to law firms and places around town. Because a lot of the places don't know we deliver as well, so that gives us a big edge, you know once people know that we can deliver down to Humana, that's been a big support for us. So I think if we would have done anything differently, we would have started earlier with letting people know we deliver and getting more boxed lunches out to law firms and things like that.

What percentage of your business is that?

20 percent right now. And of course that happens a lot during the week. Of course the time period is more 11:30 to 2 timeframe for deliveries.

How long have you been in Louisville?

I've been in Louisville for, gosh, almost five years.

What originally got you to the city?

My wife and I were living in Ireland and our son, my wife was about six months pregnant with our son Keigan, and we wanted to move back closer to family in the States. So we decided to move back, took a little time off and my wife, being from Louisville, we really researched moving to Louisville. And Louisville was moving in the direction of being a great food city and it kind of drew us here.

Nice. Were you working in restaurants over there?

I was opening luxury hotels for Capella Hotels.

There some stereotypes involved with Irish cuisine, but has it impacted your cooking at all?

It has. My parents are from Northern Ireland, so I went to Ireland a lot as a kid. We have an Irish citizenship, which makes it kind of an easy trip for me to move over there and open a couple properties. There is some influence there from the Irish side. There's always the comfort food, fish and chips and things like that.

Any changes other than staying open later now that you have your liquor license planned for Main Street Cafe?

The big thing is after we get our bar program really rolling, is to really look at that nighttime service. And we may do it as kind of a pop-up restaurant, because really I'd like to be the first pop-up restaurant in the city and kind of tie it into that. See that take off and then kind of tailor it into a more an evening focused restaurant downstairs.

Cool. Anything else I should ask you?

You know, living here in Louisville has been such a nice experience and its been so nice to see how far we've come. Even Sunday night [Cochon 555] was a great example that three, four years ago you wouldn't really have thought of something like that being here in Louisville. 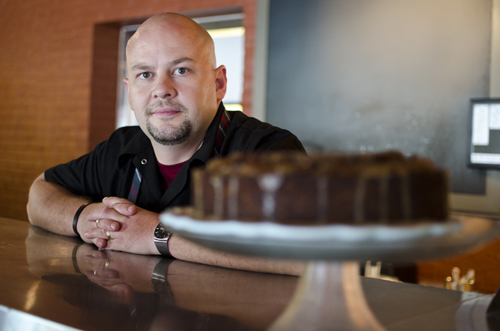