Read The Blind Pig's Admission and Settlement Agreement with the ABC

Share All sharing options for: Read The Blind Pig's Admission and Settlement Agreement with the ABC

The Kentucky Department of Alcoholic Beverage Control's dismissal of its case against the Blind Pig last week appears to have been the result of a settlement.

In an Admission and Settlement Agreement dated Sept. 27, the Blind Pig's chef/owner Joseph Frase agreed to pay fines totaling $2,500 in lieu of two 25-day suspensions of the Butchertown gastropub's liquor license. The dismissal of one of those suspensions, however, is contingent on the Blind Pig not having a repeat violation in the next two years.

Frase was asked Saturday afternoon for details about the dismissal of the charges. This article will be updated should he respond.

The agreement was obtained via an open records request filed with the ABC. Download a .pdf of the agreement here or view an image of it at the end of this article.

The violations, which occurred on or about Jan. 16, 2013 accused The Blind Pig of

Here's the backstory—again—about what's happening with these two popular Butchertown spots (it's largely a copy and paste from an earlier story, so if you've already read it, feel free to resume working on your application to be Eater Louisville's new editor):

In early April, Meat abruptly announced its temporary closure. A week later, Meat's owner Peyton Ray said a dispute with the Blind Pig involving liquor licensing was the reason. Meat had been "depending on the liquor license of the guys downstairs," Ray said at the time. "Unfortunately, our relations with the guys downstairs deteriorated so much and so quickly that they finally, the other day, just turned off the lights, locked the doors, turned off the water." (Frase disagreed with Ray's allegations but declined to comment further at the time.)

Meat then applied for its own liquor license. Back in April, Ray had said he'd "probably find out more on the status of our [alcohol] license application" on the date of the Blind Pig's hearing—which had been scheduled for May 16, but was later rescheduled to Aug. 13 and then pushed back again to Sept. 30. "We're fully planning on reopening, we just don't know when that's going to be—it could be at the latest, July," Ray said at the time Meat closed.

After the ABC dismissed its case again the Blind Pig on Sept. 27, however, Ray did not respond to a request for comment about Meat's status. 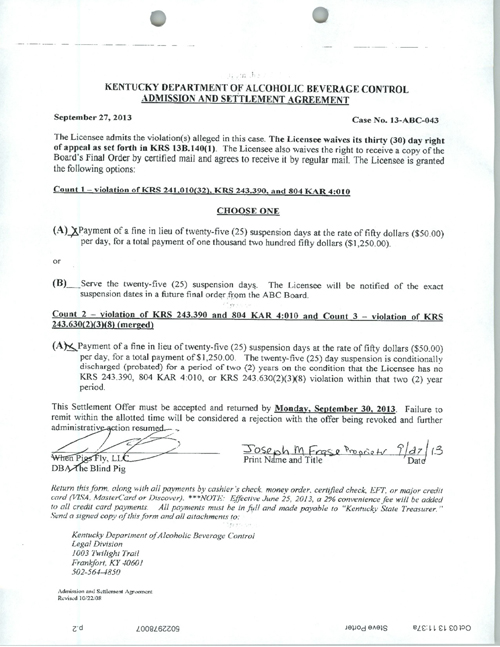