In a conversation about Louisville's progressive farm-to-table scene, Sarah Fritschner's name is bound to come up. A food journalist for 30 years, including stints as food editor at the Washington Post and the Louisville Courier-Journal, Fritschner now heads up the city's Farm to Table Initiative, which "connects farmers from Kentucky with restaurants, schools, workplaces and individuals in Louisville." Here, Fritschner talks about why Louisville's a thriving area for farm-to-table restaurants, how she works with restaurants and why chefs should consider a little lamb sausage.

Your name has come up so many times around town when discussing why Louisville is such a thriving area for farm-to-table restaurants. What is the rational for why it's so good in that particular area?

Well I might argue it's because local food tastes better. That's how I got into it. I was a nutrition major and wanted everyone to eat food that was good for them. If it didn't taste good, then they wouldn't eat it, so I came at it that way. That's what I would argue.

But, also we have a lot of independent restaurants and a lot of independent restaurants can be stereotyped as being ahead of the curve. With leadership coming out of the Grisanti organization, all of those high standards, I think everyone interpreted them differently, but we had some leadership, starting with Kathy Cary using local food, that's helped. We covered it a in the Courier-Journal and it helps to promote local farmers markets in the Courier.

We gave out local maps of farmers back in the day, in the 90s. It is a farming state, because of the tobacco program, which was not a subsidy but a lending program. Many farmers could make a living on small farms, which often is hard to do, but tobacco made that possible. So now we have tons of farms. Many people are not far removed from there farming past, so they remember stuff.That doesn't mean that they are stuck on green beans and corn on the cob, not that there is anything wrong with that. I think as far as the meat is concerned, it tastes so much better and you don't have to worry about it as much. With produce, it is fresher and more interesting if you change your menu with the seasons. If you never change your menu, it is kind of like spinach dip and wings. Some people want to go eat the same thing every time.

You mentioned tobacco. Can you explain the tobacco settlement a little bit?

In 2000 or 1999, there was a tobacco settlement where the attorney general and 48 states settled with the tobacco companies and now the tobacco companies make payments to the states every year. Kentucky was among the minority, in fact I think for a while it was the only one, maybe a couple more are doing it now like North Carolina, saved some of that money to help farmers diversify. Instead of having to leave their farms or buy more farmland in order to grow less valuable crops, they could submit an application to the ag development board and say, "I am interested in improving the beef genetics of my herd" and then the ag development board would make a grant. It's a granting situation.

So there is a 15-member board for the state and then there is a board at county level. So if a county farmer comes and says, "I want to make a winery or open an agritourism spot and build a corn maze" or "I want to make cherry soaked in bourbon from my cherry tree," any value-adding thing, they could help. People write a grant request form and then they go over them once a month. So that has really helped our beef genetics and now we are increasing our beef. We have more beef in Kentucky out of any state east of the Mississippi. Beef genetics help us keep it here and it's a high-quality beef.

How did the city's Farm to Table Initiative come about? What does it do?

I am a project of Louisville Metro. It came about because Wendell Berry and some representative from Brown-Foreman thought that political leadership should be paying more attention to food as an alternative crop to tobacco and they thought Louisville could use its food-buying power to help farm income. A bunch of county judge executive met with the mayor of Louisville, they applied for a grant to study the food market in Louisville. The study recommended bunch of things, one being this job. It recommended a ton. It said there should be a downtown wholesale food market hub where trucks could deliver and trucks could leave, things that weren't really in the city's control. This was a small enough commitment.

So the city oversees my grant, they are my fiduciary agent, and then there are judges and extension agents and people who sit on my board of directors, they don't call it that but I meet with them every other month or quarterly to talk about the project and someone from the city comes. We review what has been going on. Mayor [Greg] Fischer has just taken it to a new level of commitment and understands the potential the food and beverage sector has to offer to Louisville. 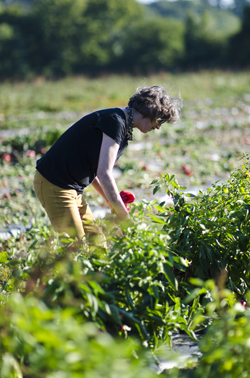 What are some of the ways that Mayor Fischer has done that?

Well one of the things he did was collaborate on a private-sector demand study, so the city didn't pay for it, but we can quantify the demand. So now we have Theresa Zawacki, I don't know what her title is [executive administrator at the Louisville Metro Economic Development department]. But he is someone who is in charge looking out for it. So, that is way different the before. Someone who gets up every morning and that is part of her responsibility, so that is hugely significant. Then he works with the private sector to try to attract food businesses to Louisville.

What are some ways you have worked with restaurants in your current role?

The smallest thing would be if someone called me and said where can I find persimmons or where can I find beef. Someone just called the other day and said she wanted lamb for her menu. Turns out she actually wanted rack of lamb or lamb chops. Everyone wants lamb chops. So what I try to do is say how many lamb chops do you serve in a week? Could you on that plate put a little lamb sausage or four lamb chops instead of six? I come up with some kind of compromise so it works out for the lamb grower and it works for the processing plant and it works for the restaurateur. In this case she said great, I have wanted to put a lamb burger on our menu forever. So in this case she can take the chops and a minimum of ground lamb. That's a win for everybody. I guess I just know a lot about food and restaurants. I can read a menu and say can you do this or this? I am kind of familiar with what the farmer and the processor need and I am kind of familiar with what the restaurant needs. So what I try to do is help them determine a compromise. Sometimes someone is opening a new restaurant and they come to me with a list of stuff. I just try and connect them with people. Sometimes people want to revamp their menus and they want to get all the free stuff that they can so I hook them up with grants and farmers and that sort of thing. It can be anything really.

It might be three or four times a quarter. But then there might be, like this event we had with Heritage BBQ at 21c [Cochon 555], so I am working with restaurateurs on that. Or Grasshoppers Distribution might be doing a function at Decca, so I might be involved with that. It's not like the restaurants ever drop off my radar. The Marriott at Hurstborne, is doing a big agricultural week, a two- or three- or four-meal event with agricultural officials from all over the state and elsewhere. So I am working with him to make sure that looks great. He is a great chef. He is doing a great job. So I am helping him meet people and saying hey can you do lamb sausage. It's that kind of thing. Even though chefs or restaurants don't contact me everyday, I am still in the weeds with them a lot.

If you had three suggestions for how a restaurateur could work better with area farmers what would they be?

From my point of view I would say, know what your goals are in terms of how you want your food to show up at the restaurant. Do you want a farmer showing up? Great. If not, do you want a distributor? We can do it both ways. I would say be in touch with the seasons and be flexible.

What trends do you see coming forward in Louisville's dining scene? Any sort of animals or crops that are emerging out of this area?

I see more large-volume interest. The restaurant has set the example and made it cool and made it interesting and made it possible. Now large volume. I don't know if it's because chef's have gone from being an independent restaurateur and all of the long hours, so they went somewhere more secure like a Marriott or something more corporate. It is spreading. It is not just the true-believer types anymore, it's the next layer of people saying, "Yeah that's cool."

More flexibility in dealing with what you might call hard-to-use produce, turnips or watermelon radishes. You know the things that aren't the spring mix and tomato. People seem like they are really beginning to get that they can make things more interesting for the designer, if it something besides asparagus. I mean its mid-September. I want asparagus in March, April and May. Like in September, are you kidding me? You can't do better than this? I think that people are seeing that they can be more flexible with seasonal produce.

Is there anything else I should have asked you?

I would just make a plea that when you write this, the assumption isn't that local food is always more expensive.
·All Eater Interviews [~ELOU~] 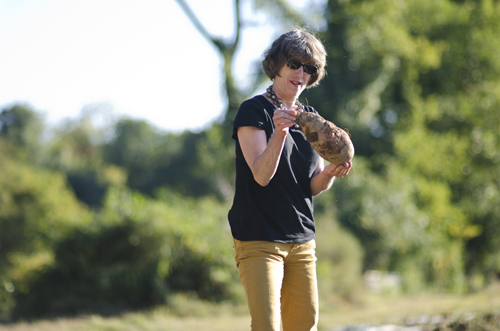