What If St. Charles Exchange's Food Never Made it to New York for its James Beard Dinner?

Share All sharing options for: What If St. Charles Exchange's Food Never Made it to New York for its James Beard Dinner?

Given the theme, many ingredients needed to be sourced locally. And given that the Beard House doesn't allow chefs into its kitchen until 8 a.m. the day of the dinner, many dishes needed to be prepped in Louisville first and then shipped to New York.

What if the food hadn't arrived? Would McCandless and company be spreading Kentucky Spirit via the Colonel's Original Recipe or Papa's Tuscan Six Cheese pie?

While all the food did make it safely to New York, McCandless and company had a back up plan. "I've been in contact with the Beard House quite a bit," McCadneless said, reached via phone on Friday. "And they have vendors and there are markets in the area, as far as the produce goes. The stuff I can't get there, I have on retainer here that I can make a phone call and have them [vendors] overnight it, Tuesday for Wednesday, since the dinner is on Wednesday: the Kentucky products I can't get in New York, the [Broadbent] ham, the [Kentucky] bison, the [Bourbon Barrel Food's] soy."

"I have some of that stuff at the restaurant as well," McCandless said. "So it'll be there, ready. I can call the restaurant and say, 'You need to take that cooler to FedEx.'"

Non-perishables, including samples of Bourbon Barrel Food's sauces for all guests, were packed Friday and shipped to arrive in New York on Monday, McCandless said.

"Overnight we're going to send stuff like produce, brussel sprout, fingerling potatoes, Stuff that I want to make fresh the day before and be able to ship it out." Those items were packed on dry ice and overnighted via FedEx on Monday to arrive Tuesday. "There's a few random things that we're going to go ahead and pick up there," McCandless said. The chef himself shipped out around 7 a.m. Tuesday.

View the complete menu at the end of this article.

So is McCandless nervous?

"Not really," he said. "I've done a lot of offsight catering, dinners in people's homes where I don't have much to work with, outdoor events where I don't even have a kitchen."

"I've never been there [the James Beard House], but I've been told the kitchen's small. But I know they have all the state-of-the-art equipment. They just put in a whole new Jade Range."

McCandless return flight isn't until Thursday night—so what about plans for a post-dinner nightcap?

"I'll worry about that when everything goes smoothly," McCandless said. "I'll probably be tired and just go to bed." 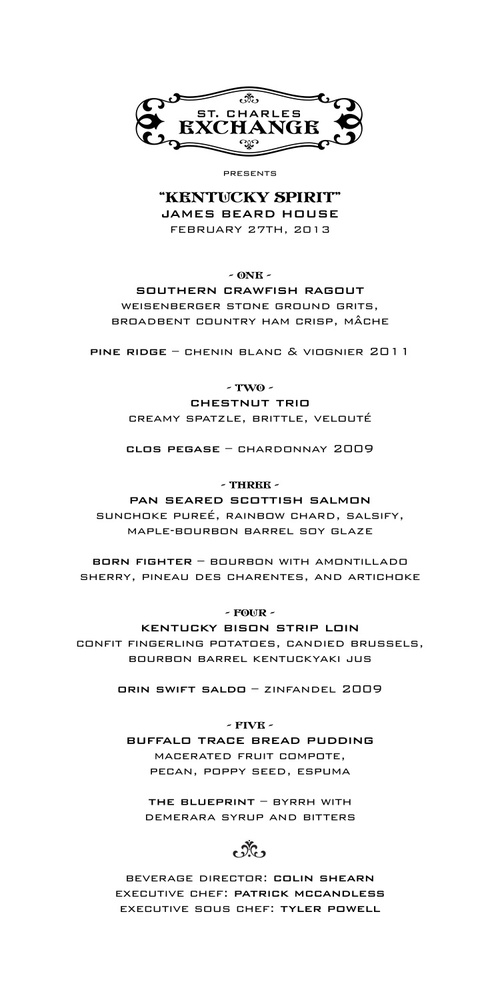