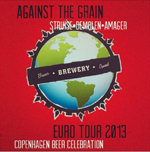 Getting out of Louisville for Derby is a local tradition almost as old as mint juleps, big hats and "My Old Kentucky Home" (with the original racist lyrics). Twelve beers from Against the Grain will be heading to The Copenhagen Beer Celebration Derby weekend (May 3-4). "The CBC, as it's commonly known, was established in 2012,'to gather the absolute best brewers around the world, with the intent to celebrate them and their fantastic beer.'" [Press release]

Against The Grain Brewery