The boot camp focused on teaching the chefs—including Proof on Main's Levon Wallace and Lilly's Kathy Cary—policy and advocacy skills. The itinerary included:
·witnessing how Proof makes use of local ingredients
·meeting with Mayor Greg Fischer to discuss embracing local food in an urban community
·spending a 14-hour day at Woodland Farm to learn about its heritage breeds of bison, pigs and chickens—including watching a hog go from living animal to dinner, produce harvesting in sustainably raised gardens and the farm's Kelley Green Biofuel program

"It's kind of a entry-level education on what we can do on using our platforms to help create change," said Maria Hines, a boot camp participant from Seattle's Maria Hines Restaurants and winner of the 2009 James Beard Award for Best Chef Northwest.

"I came out of this situation feeling incredibly enriched and empowered. I feel like my focus is more streamlined in terms of my responsibilities as a chef, whether it's to my team here at Proof or to a broader audience," said Wallace. 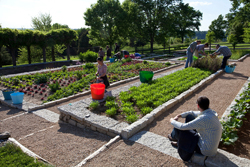 The boot-camp phase that seemed to resonate the most with both Hines and Wallace was the day they spent at Woodland Farm in Goshen, Ky. (All the photos in the slideshows at the beginning and end of this article are from that experience.) 21c Museum Hotels's owners Laura Lee Brown and Steve Wilson purchased the 150-year-old farm in 1996. It focuses on "sustainable growing practices and heritage foods." Twice a week, its heirloom vegetables and free-range livestock are delivered to Proof on Main, according to its website.

"There was a very emotional, very strong point in the day when we were talking about our heritage hogs program, which segued into slaughter of one of the hogs," Wallace said. "It was really a case study on these chefs as human beings. Some chefs were a little bit uncomfortable at first, going like, 'I don't know if I'm ready to do this right now.' Other chefs were treating this like it's another day."

Michel Nischan, chef/owner of Dressing Room in Connecticut's Westport Country Playhouse, and president and CEO of the Wholesome Wave Foundation, a non-profit organization focused on making local, healthy and sustainably grown foods available to everyone, introduced the subject. "He spoke a little bit about the importance of understanding, as chefs our responsibility: meat doesn't just come from the butcher. This is what it is. This is life. We need to be responsible and understand that. And it led right into the slaughtering of a pig. It was almost as if the farm fell completely silent, like time stood still, as we all watched the life leave this being," Wallace said. The hog was killed with a gunshot to the head. Wallace describe the scene:

Very humane. It was very interesting to see this group dynamic the closer we got to it being a fabricated piece of meat. It went from slaughtered hog, hung up and we're removing the entrails—I'm fairly passionate about that kind of stuff. It's really important. So we're in there and skinning the hog and removing the innards and stuff. 'Hey I want this, I want that.'—The closer we got to really breaking it down into primals like, 'This is no longer pig's legs, it's a ham; this is no longer its rib cage, those are ribs,' that's when, at least for me just observing, that's when the group really started to come back. It was a very, very powerful moment. "We then took that hog and prepared dinner for 60-70 people," Wallace said "It really just kind of made everybody a lot more passionate and stronger."

Also at Woodland Farm the chefs harvested vegetables and toured its biodiesel program. "There was kale and carrots and asparagus and a bunch of beautiful lettuces and then some really beautiful eggs that they had on their property," Hines said. 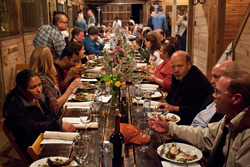 We received a little bit of advocacy training and we did a couple of exercises that really created a lot of focus and just allowing us to play around. Okay, 'well let's take this topic of improving food in school systems and we will use this as a topic and kind of go through the motions of how you put it all together in order to take action. Proof's chef de cuisine, Andrew McCabe, an Eater Young Gun semi-finalist, set up a mobile kitchen and the chefs prepared a meal that night with the ingredients they harvested that day, as well as other local products the Kentucky's Department of Agriculture furnished. Also, there was bourbon. It was served at a long communal table in the farm's horse barn, accompanied by a band that featured My Morning Jacket drummer Patrick Hallahan.

"It rekindled for me the passion and genuine affection that I have for not only Kentucky, but Woodland Farm, 21c, Proof on Main, and Steve Wilson and Laura Lee Brown and their philanthropy and what they bring to the table in terms of preservation and resources," Wallace said. 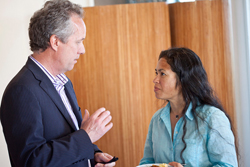 Mayor Fischer spoke with the boot camp participants Sunday night at a reception at Proof's penthouse. Wallace said the mayor's remarks, "left me completely inspired about what this city does and how much this city cares for its natural resources, its artisans, its people and its culture." Said Hines,

It was really inspiring to me to see public officials really stepping up and really caring deeply about the food system within their area. One of the things the officials talked about and then we heard a little bit more about was the demand study for local food that they had done [The Louisville Local Food Demand Analysis published in December 2012]...The fact that it was paid for by the local philanthropic community, the business community and so the idea that you could work to get information and make some decisions that have some real economic and job impact behind them is eye-opening for a lot of the folks here. "I think it serves us very well to show how when you have an engaged public sector and an engaged non-profit sector and a really engaged business sector you can get stuff done," said Mitchell Davis, executive vice president of the James Beard Foundation.


The Dinner at Proof on Main Experience 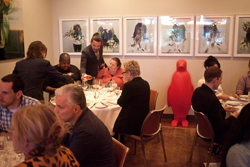 Despite the event's name, the James Beard Foundation flipped script on Marine boot camp: rather than breaking down the troops immediately on arrival, the chefs dined at Proof their first night here.

"I wanted to make sure that they got a clear and accurate snapshot of what we do at Proof. That's really what the trip to the farm was as well. We wanted to make sure everyone felt incredibly comfortable," Wallace said. "Obviously, the pressure is on. These are incredibly talented chefs. But we really didn't create a whole separate menu."

Wallace ate with the other boot camp participants, delegating his duties that night to McCabe.

As for how Louisville and 21c came to host the event, Wallace said representatives from the Beard Foundation had been to town a few times. He said the city's diversity and atmosphere was perfect to "encourage creativity and an open dialogue with these chefs."

Proof was just one of the local restaurants the group visited. "We went to Jack Fry's one night and had a really fantastic meal, and then I was able to go to Harvest for brunch and had a fantastic meal," Hines said. "With the pictures of the farmers and the producers up on the walls, it's a really great space and really gives a nice sense of place when you're there. You get the feeling that you can really experience local flavors, which you are able to do through quality."

While the boot camp focused on chef's embracing their own region's food, Hines said she picked up some Kentucky influences during her brief visit. "There's amazing fruits here and there's a lot of access to amazing ingredients in the area that I wasn't aware of." Hines also mentioned Kentucky country hams, sorghum and, yes, bourbon. "That's gonna be definitely one of the things that will excite my bartenders as well as bar patrons—to be able to share with them these small batch producers that we can't get all the way on the other coast."

Asked what he thought left the biggest impact on these guests, Wallace, a California native, said, "The one thing that kept coming up was the genuine care and hospitality. That shows. That's why I'm here."


The Chefs Boot Camp for Policy and Change in General Experience

Hines also attended the Beard Foundation's pilot Chefs Boot Camp for Policy and Change last summer at Blackberry Farm in Walland, Tenn. "It's actually very similar to what the pilot was like," Hines said of this week's session. "Which was great because it means that they nailed it the first time."

Today I was thinking about with chefs, our identity, especially over the past 20 years, the change that has occurred. We went from being in the United States, a blue-collar profession, and I feel like the James Beard Foundation has really insisted on turning it into a white-collar profession, which then created a lot of media. Once again they are challenging and inviting us to take that next step, now we have this voice, giving us the tools to be able to do something with that voice and with that platform that we have. I think it's great they are leading. "That was huge," Wallace said, "Understanding not only the role of the chef, but the responsibility we have now. I think the word 'rock star' was thrown out a couple times. I kinda see where that's going. The young cooks coming up are looking at these chefs, saying, 'Ok, what does this person believe in?'"

According to a press release,
The Chefs Boot Camp is conducted under the direction of JBF Award-winning chef and founder of Wholesome Wave, Michel Nischan and Founder of Arabella Advisors, Eric Kessler. At each boot camp, chefs receive policy and advocacy training by industry and political experts through the lens of a specific food system topic. A day of classroom work, mock-interviews, hands-on activities that engage the chefs with local natural resources, and a collaborative dinner cooked by the participants culminates in a morning of strategic brainstorming about effective action points and next steps. "Over 280 chefs have applied to the Chefs Boot Camp program to date. Participants were selected to represent regional and topic interest diversity, with consideration given to the voice that each chef has within their local community and nationally," according to the press release. The other chefs who attended this Chefs Boot Camp for Policy & Change were