Where to Eat at Louisville International Airport (SDF)

If you buy something from an Eater link, Vox Media may earn a commission. See our ethics policy.

Share All sharing options for: Where to Eat at Louisville International Airport (SDF) 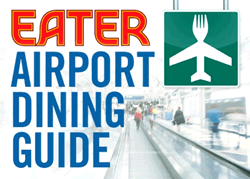 Louisville International Airport is the ninth busiest airport in the world. For cargo. And sadly cargo doesn't eat. If it did, UPS (the reason for all those packages) likely would demand better dining options. But hey, at least SDF's bathrooms—Dyson Airblade hand dryers!—are among the nicest of any airport.

1) Starbucks: After enjoying Louisville's distinctive coffee culture, these spots allow departing travelers to get reacclimated to life back home. Sad fact, a pre-packaged sandwich at the recently renovated Starbucks after security is your best bet in the airport. [Between Concourse A and B, lobby before security]

2) La Tapenade: This Mediterranean grab n' go kiosk is new since Eater Louisville's original airport dining guide was published. And while it's yet to receive any feedback on Foursquare and it doesn't even have a Yelp page (can it really exist then?), its pre-packaged sandwiches and salads are among SDF's least bad options. [Gate 10]

3) KFC: Eat local (or something)! But you'll need to finish before going through security, Colonel's Crispy Strips being a threat to national security and all. (Although it's unlikely TSA will detect a pocket full of popcorn chicken.) [Lobby before security]

4) Heine Bros. Coffee : Sadly SDF's one sop to a local coffee shop comes off like an after thought, stuck near baggage pick up. [Baggage pick-up lobby]

5) Woodford Reserve Bar & Grill: Not looking forward to seeing whomever you're waiting to pick up? Down a Manhattan or three, then make them drive. [Lobby before security]

1) Le Relais: Sadly the best terminal dining option is at the Louisville airport you're not flying out of. But you don't have to be killing time in the terminal waiting for your private jet to get stocked with Pappy to visit this art deco French bistro.
Foursquare