Share All sharing options for: Down One Bourbon Bar Unveils New Dinner Menu

On April 23, about two months after it opened, Down One Bourbon Bar added a dinner menu. Previously it had served appetizers, soups, salads, sandwiches and sides. (and bourbon).

Download a .pdf of Down One Bourbon Bar's new dinner menu here or view a .jpg of it at the end of this article.

"The shrimp and grits is something I have done for a long time," Christian Hattemer, Down One's general manager, said via email. " We make great grits to begin with, the shrimp are from the Gulf not Vietnam or China. They are wild and have more flavor and also provide jobs for American fisherman. We make a stock from the shrimp shells and then a shrimp veloute from that. The shrimp themselves get sautéed with Andouille, Tasso, and Tomato Fondue. All of that is then served in a cast iron skillet."

Down One also added the fish board and Korean pork belly appetizers to its menu. "The belly has black garlic, kim chee, daikon radish slaw, lettuce cups and gojujan vinaigrette," Hattemer said. "We roast the bellies for about five hours at 180 then press them over night. It gets cut into slabs and seared on the flat top before it goes out." 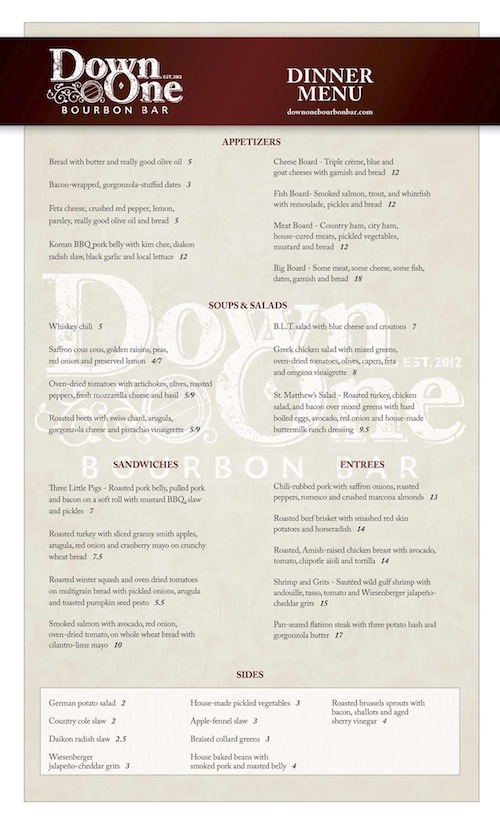 Down One Bourbon Bar