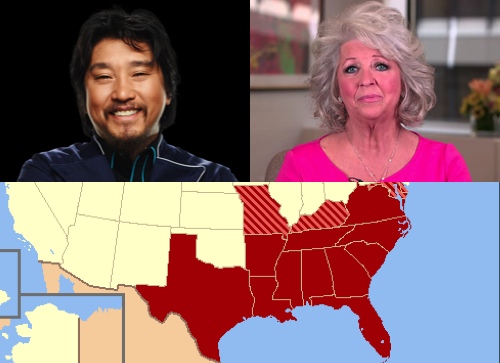 Welcome to Hot Topics, in which chefs chime in on a major issue in food. Today, 610 Magnolia and MilkWood chef/owner Edward Lee shares his thoughts on Paula Deen's racist comments and the response they've brought about.

Earlier this year, I shot an episode of Mrs. Deen's show in Savannah. It was set to air this summer. It will not. Frankly, I'm quite okay with that.

In my infinite innocence, I was excited for it. I was flattered that Mrs. Deen would even ask me on her show. I felt like we connected the Old and New Southern values through a dialogue of food – albeit in light-hearted and sugar-coated cooking skits. I dare say, I felt proud. In light of all the noise that surfaced this week, I realize there is still a deep ravine between the two and the opinions of many this week was an exercise in tearing apart rather than building bridges.

Mrs. Deen was gracious, friendly and funny. Unfortunately, none of those qualities trumps racism. I am not an activist. I am just a cook who lives in the South. But my world encompasses many diverse peoples and races, and I know the hurt and the violence that can sting behind a few choice words, even said in jest.

But leaving Mrs. Deen's foibles aside, what I was most dismayed about this week were the provocations by a number of outspoken people who over-simplified this vast swath of symbolic land called "The South." Racist rants, dumb jokes about Southern culture and, at times, a particularly mean-sprited skewering (sorry for the pun) of Mrs. Deen herself. To say things like, "that's just the way it's always been" is not only inaccurate, but far worse, it is lazy.

The South that I live and travel in is one that is buoyed by diversity, acceptance, generosity and love –; the people and kitchens of the American South have enriched my life with culture and respect. Does the antediluvian stains of racism exist here too? Of course it does. Just like any place where Old World values collide with progressive change, where tradition is asked to bend to modern society. So bascially any place in America. But the South that I choose to live in does not happen by chance, or by wishful thinking. It happens because people choose to participate. They choose to gather and question and communicate and include and shake hands. It takes work to build a community.

Every so often, scandals like these erupt in entertainment, fashion, politics, wherever people and cultures meet. It reminds us of the work that still needs to be done. But the first step is simply to want it. I didn't hear a lot of that this week. To me, it's just as easy to build bridges as it is to tear them down. It starts with a choice.