Keep on Rockin' at Against the Grain, BBQ at 610 Magnolia, Eat and Watch Ice Cream at Seviche, Root on Damaris

Share All sharing options for: Keep on Rockin' at Against the Grain, BBQ at 610 Magnolia, Eat and Watch Ice Cream at Seviche, Root on Damaris 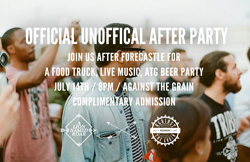 The Official Unofficial After Party
When: Sunday, 8:30 p.m.
Where: Against the Grain (401 E. Main St.)
What: After Forecastle (well, almost after it), Against the Grain and Original Makers Club are hosting The Official Unofficial After Party. Grind Gourmet Burger Truck and French Indo Canada food trucks will be on hand, as will Western pop bandA Lion Named Roar and AtG's beers (duh). Admission is free. 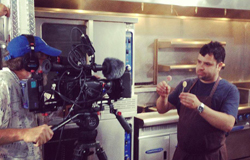 Food Network Star Viewing Party
When: Sunday, 8-11 p.m. (show airs at 9 p.m.)
Where: Molly Malone's Irish Pub & Restaurant (933 Baxter Ave.)
What: Watch Louisville's Damaris Phillips compete for her own show on Food Network Star. The viewing party is back at the top deck at Molly Malone's. The Jefferson Community and Technical College culinary arts instructor was where she belonged in last week's episode: at the the top of the competition. There'll be viewing parties for as long as Phillips is on the show.