The Louisville Metro Department of Public Health & Wellness will inspect the restaurant again within 7 to 10 days of the original inspection, as is its practice for restaurants that receive C ratings.

The C sign on Havana Rumba Express's front door said the problems were related to food conditions/safe temperatures and hygienic practices. In an explanation Havana Rumba Express posted next to the score (a photo of that letter appears at the end of this article), it attributed the safe temperature issue to empanadas being kept in warm display cases while the hygienic practices issue was because line servers were not changing their gloves and washing their hands as frequently as they should.

Reached via email Friday morning (before posting a public explanation), owner Marcos Lorenzo elaborated on the scores via email:

I don't have all the details yet. Since I'm still out of town, flying back to Louisville today. It seems like there were a few minor violations (not food related) that started to add up to the C score. The only food related violations are:

* The empanadas (beef, chicken, etc) cannot be in a warm displays case. According to him they don't have the right temperature inside. Which makes me wonder how Panera Bread gets away with having the egg soufflés on display without getting in trouble.

* Line servers on the Express line are supposed to remove their gloves every "5 minutes" and wash their hands. Even if they have customers lining up in front of them. However, we are happily willing to comply.

There were a few more minor violations such as:

After 4 weeks in business we are getting ready to open for lunch next week. The inspection caught us in the middle of a small renovation process in the kitchen in order to accommodate for the increase in sales. We are bringing in new kitchen equipment, moving others around. All this process is happening in the mornings. However, as you probably know, moving electric outlets, patching walls and having temporary extension cords it's something inspectors don't like. However, they are all necessary in this growing process.

Most of the violations were solved immediately. I think most of the issues are related to having a new concept. We are doing things that have not been done before, specially in the city of Louisville. I think it is going to be a learning process on both sides. To give you an example, we cook several items on Sous Vide. The inspector doesn't want us to use again until he can give us the guidelines of how to do it properly according to him. However, he didn't know what the guidelines are.

I want to assure that my kitchen personnel is trained and capable of delivering on every request the inspectors have. We are doing everything and taking every step to have this situation solved ASAP.

If you want to see how we work and how my kitchen looks like I invite you to come over anytime.

We apologize if we have disappointed any of our customers and promise you all steps are taken to have this solved.

The C rating was posted Thursday night, according to an Eater commenter ; the Louisville Metro Department of Public Health & Wellness's website didn't include the rating until Saturday at the earliest. 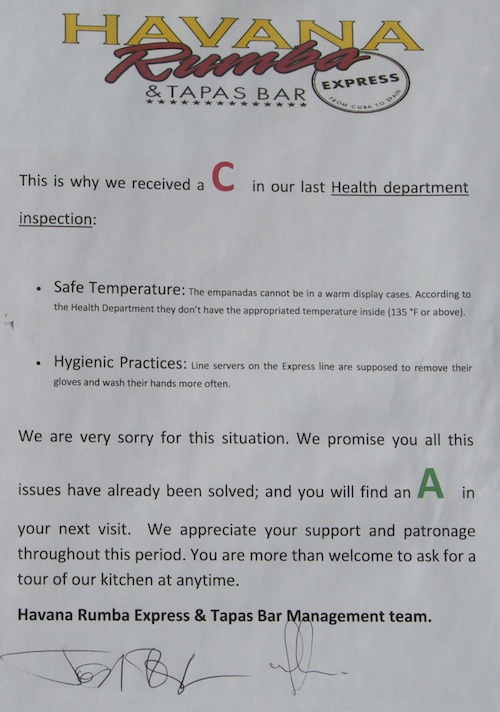