Proof on Main's Levon Wallace on His First Year

Share All sharing options for: Proof on Main's Levon Wallace on His First Year

Welcome to One Year In, a feature in which Eater sits down for a chat with the chefs and owners of restaurants celebrating their one-year anniversary.

June 4 marked executive chef Levon Wallace's one-year anniversary at Proof on Main. Already considered among the best restaurants in Louisville, reviews of Proof since the native Californian took over its kitchen have almost universally praised his work. Over burgers at Bambi Bar a few weeks back, Wallace discussed the warm reception the city's restaurant gave him, Louisville's resistance to "embrace this little giant that we are" and singing the songs he wants to sing.

So what's been the biggest surprise of your first year here in Louisville?

I don't know about a surprise but, a good welcome surprise was the community, the kind of open-armed embrace, not only from the community but also more importantly the chef community. And it's truly just humbling and flattering to be welcomed with open arms by the city's best veteran chefs really from day one.

Do you have an example?

Yeah, Anthony Lamas was one of the first to reach out and say welcome to the community. But ever single Louisville chef that I've come across has been absolutely nothing but sweet as pie. Also the entire crew from Against the Grain was incredibly hospitable and welcoming during my first few days in town.

That was a big task. It was a little daunting. I was talking with one of my colleagues about how, in my previous job, I was used to acquisitions or taking over kitchens. And it's not as hard as it would sound. But to an arena that has had this culture, this tightly knit culture, for six plus, almost seven years, it was a lot bigger than I thought it would be. And Michael Paley is an incredibly talented chef, still his presence is felt in the city. And so those were big shoes to fill. I welcomed the challenge and thoroughly continue to enjoy it.

Has that made it tough to put your own touches on the menu? Because obviously you've got the grilled octopus; regardless of your opinions on it, it's a staple there and honestly I think you'd have an uproar if you removed it.

I love, capital L-O-V-E, I love the grilled octopus. You know, every property, every restaurant, talking about acquisitions or taking over restaurants, has those signature staples, they're absolutely essential. For me, it's a grounding point, it's something that keeps my focus grounded on what the statement is and what Proof on Main is to a lot of people, to a lot of people that come here from far because they had the octopus two years ago, three years ago, And it's still with them. And for me, to be able to provide that experience, that to me, the pleasure and the privilege is mine. In terms of being able to express myself on the menus, Paley, like I said, a tremendous talented chef. And our styles are different, but I think that the transition has been pretty smooth.

What about trying to keep up with Proof's hectic schedule, with events like Derby, James Beard Boot Camp...How does that compare to previous experiences you've had?

I think the beauty and the charm of Proof on Main is that some folks might forget that Proof on Main is a restaurant and it operates like a high-end independent restaurant. And restaurants, especially high-end, high-caliber restaurants within high-class hotels require a lot of attention and Proof on Main is no different. That operation runs about 20 hours a day, our equipment runs for 20 hours a day. I oversee breakfast, lunch, dinner, in-room dining, banquets, catering and anything else in between. It's not for everybody, but I certainly enjoy the challenge.

What about Louisville itself, what's it been like moving here, relocating here?

I absolutely love Louiville. I've been quoted to say how much I want to be from the South. In the past 10-plus years, I've bounced around up and down California, all the away to the far East Coast, and down to Florida. I've seen a couple of places and I've never really felt as I do here in this area.

Anything about this city frustrate you?

Let me think about that one for a second...Let me start by saying that I fully embrace the progressive nature and the open-minded culture that exists in Louisville. In terms of a dining scene, there's still some resistance to change and to kind of embrace this little giant that we are. I mean, we are, and when I say we I mean Louisville, we're a fraction of the size of a big city say like Atlanta or Indianapolis. But, within our food community, within our restaurant community, we have just as much, if not more diversity, dynamic, talented and driven chefs, restauranteurs and operators that rival some of the biggest food cities. I really look forward to seeing that growth continue, and it shows with the number of restaurants that are opening that are really trying to make a statement outside of the old standbys.

The next trend that's going to hit Louisville culinary wise?

I think we were just talking about restaurants very much like Feast [BBQ], fast-casual, quick-service, but still with the utmost attention to quality. That's really awesome. You see bits and pieces of stuff where you have these little, small arenas that are producing massive, big flavors, big ideas, big volume for that matter. 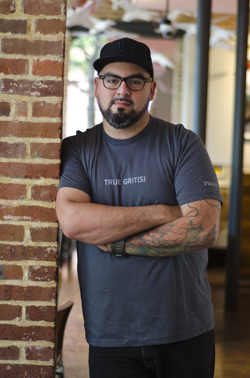 Not gonna get the fleur-de-lis tramp stamp?

No fleur-de-lis tramp stamp, not quite yet.

You chose to live in Southern Indiana.

I do, I live right over the bridge. My commute is no different than say the Highlands or Old Louisville. The only difference is that I have two big acres where I can sing the songs that I want to sing.

Do you have any changes in store for Proof in year two?

I'm really working closer with Stephanie Tittle, our horticulturalist. The statement of Proof is farm-to-table, or whatever you want to call that. But, the more and more I become engrossed with the culture, and when I say the culture, I mean Kentucky roots. You have to understand, for me things like pawpaws are completely foreign, I mean I really look forward to embracing this culture, this food culture and its roots, with cleaner flavors.

What are some of your go to spots around town?

Well I mentioned Feast earlier, and I just recently discovered Bambi Bar which has an incredible burger. It really depends, it seems that every chance I get, I'm finding new favorite spots. Morris' Deli is a favorite of mine just for a quick snack. Their beer cheese is my favorite in town. But, truth be told I don't get out that much.

In general, what are your hours?

I could definitely be a little more conservative but I get to work around nine and I usually leave around 11 or so.

Anything else I should ask?

Do I think Damaris [Phillips, a culinary arts instructor at Jefferson Community and Technical College] is going to win [Food Network Star]?

I think she's got a really, really good shot. [She won, but you probably knew that. –Ed.] This last episode and the ones leading up to it, I think anyone that knows her—and I was fortunate enough to [meet her] the second night I moved to town—I think anyone who has met Damaris knows that she's an incredibly charismatic, magnetic personality. I think she's got a shot. I think its kinda cool to watch her get a little polish. Because, like I said, if you've met Damaris before she's kind of a free radical, if you will.

·All Proof on Main News [~ELOU]