In June, Mark Ford took over the kitchen at St. Charles Exchange, on the heels of the downtown restaurant losing two executive chefs in less than a month. A native of the Dayton, Ohio area, Ford's been a Louisville resident since he moved here at 18 to attend Sullivan University's culinary school. A veteran of L & N Wine Bar and Bistro and Z's Oyster Bar, Ford spent three years at the Louisville Country Club under the tutelage of Daniel Stage. Three months in, Ford has already overhauled the menu and launched Sunday brunch service. Here, Ford discusses learning from Stage, changes he's already made and his plans for St. Charles Exchange going forward.

Explain the changes you've made to St. Charles Exchange since you've taken over.

I changed the menu nearly completely. I kept a couple things, the Elvis on horseback, which are the bacon-wrapped peanut butter dates on banana vinaigrette, and the deviled eggs which are kind of signature dishes. I wanted to change everything to fit my style.

How would you describe your style?

I'm classically French trained, I have German-Italian heritage, I really like the cuisine of the American South, the slow-food comfort-food kind of thing. And I try to let those influences show through my food.

So what was your starting point on deciding what dishes you were going to change? Was it something like "I'm going to keep the deviled eggs because there a signature dish" and then go from there?

Working at Louisville Country Club I ran three specials every day, so I had been working for three years on developing my own menu. He [Louisville Country Club executive chef Daniel Stage] had given me free reign, and I'd come up with dishes and he'd add his touch to it. So I had an idea of what I wanted to do and creating my style. Walking in, I had an understanding of where I wanted to go and what I wanted my menu to be like.

What was it like working Daniel Stage? I hear him mentioned all the time. Since I've been in Louisville, he's worked at the country club, so I haven't had the chance to eat his food. But a lot of chefs around town mention him.

He's a tough guy, he makes you work hard, he tears you down and builds you up. He's turned out a lot of good chefs around town. When I look back at the 10 years he was at Le Relais and the three years I worked for him at Louisville Country Club, Coby Lee Ming was a sous chef [now at Harvest], Andrew McCabe was a sous chef [now at Rye on Market], Josh Lehman at the Holy Grail. Yeah. Brian Morgan was a sous chef [now at Eiderdown]. So it's like he brings people in, and when I was with him I promised three years and he told me after that I'd be ready to run my own show.

Is that the case?

That's basically how this happened, I gave him three years and I ended up at St. Charles Exchange. 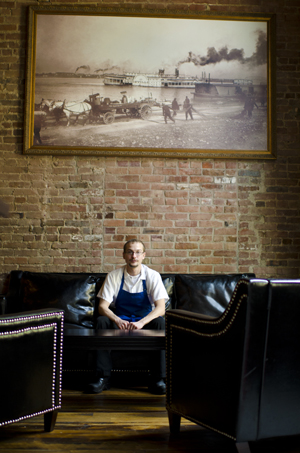 St. Charles Exchange went through two chefs in a month. I know the beverage director [Colin Shearn] just left. Was the stability there a concern for you?

The beverage director, I don't think he disliked St Charles. I think he was offered a better position where he was allowed to run his own show and make more money, so I can't blame him for moving up. I think the same thing with the executive chef, by the same company offered more money and better opportunities. Those guys moved on to do their own thing. Everything I've heard about the company is positive and we're ready to do great things here.

St. Charles Exchange's space is stunning. Has it influenced any of the dishes there?

There have been things I've done that are more summertime that I've thought of. There's a whole roasted artichoke on the menu. It's one of those dishes that my fiancée and I make, we will roast artichokes and sit on our patio at home and eat. I consider it one of those nice family-style appetizers—sitting outside, having a glass of wine and eating an artichoke. You know I want to try to keep things refined but approachable and make it fit the setting. I'm trying to work on nice plate ups and such.

Keeping with being refined but approachable, that's a pretty good way of describing the shrimp and grits that you guys have. How did you come up with that presentation? People come in with expectations are yours is a little different.

It's something I've been playing with for a while. Like I said I like food of the American South, you know, so I'd done a dish a couple years ago, it was shrimp and fried okra then I did a shrimp with brown roux, it was very Cajun. So it was taking that idea and turning it into shrimp and grits. I tried to show my French training that I have, and bringing in other influences.

The desserts, you're making them yourself?

Yes, we make them all in house.

Describe how you got into that. You said you were doing desserts at the Country Club.

Yeah. When Ashley Holt left [after winning TLC's Next Great Baker], we tested out a couple people in the pastry department and things weren't working out the way we hoped so I jumped in and took over. It was tough. My pastry training was three months in culinary school three years ago. It was rocky but after a couple years I hit my stride and knew my capabilities and just kind of did what I knew and starting putting out some decent desserts.

So what are your plans for St. Charles Exchange going forward? Any changes you're planning on making with the menu or are you sticking with what you have?

The menu will change throughout the seasons. I like to work with as many local farmers and producers as I can. In two months I've already changed the menu slightly once. I had a pea puree on scallops and that went out of season, so I got hold of red peppers. So I changed the pea puree to a roasted pepper puree. Things like that. I'll probably make some more significant changes going into the fall. I'm sort of changing how we have the menu set up as far as how it was broken up into starters soups and salads then our cheese and charcuterie which was on the left side of the menu. So I'm changing that to one cohesive group of dishes and will be adding some small plates to that in the next week. I'm going to add on a short rib small plate, a dish that's inspired by a pasta alla vongole which is like pasta with a clam sauce where I'm using calamari?I'm going to cut the calamari to mimic pasta and instead of rings it's going to be strips, so I'm doing a play on that with clams. I'm going to add on a vegetarian small plate that's going to be kind of like a layered potato dish in a gratin style but instead of cream blue cheese and caramelized onion and poached egg.

So I've pretty much asked everything I wanted to. Is there anything else you want to add?

We are making changes in the way that the restaurant is running. Like Tuesday we're doing half-priced bottle of wine night. We're trying to promote our patio. A lot of people don't know how nice of a patio we have. People in the industry I tell to come by to the patio they say "You have a patio?"
·All Eater Interviews [~ELOU~]
·All Eater St. Charles Exchange coverage [~ELOU~] 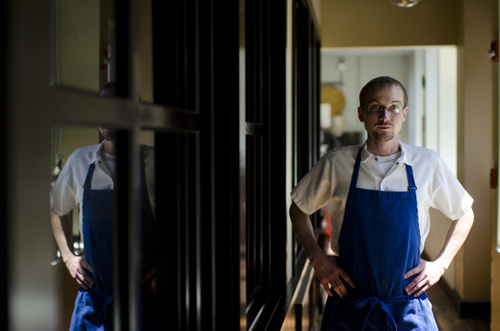