Christopher's at Mid-City Mall Was Served an Eviction Notice

Share All sharing options for: Christopher's at Mid-City Mall Was Served an Eviction Notice

Christopher's, at the Mid-City Mall, was served an eviction notice on Aug. 23. The restaurant owes $6,641.66 for non-payment of rent and utilities for June through August 2013, according to the petition for & writ of forcible entry & detainer, which is posted on the restaurant's door (a bad photo of which is at the end of this article).

The restaurant was given "notice to vacate" on Aug. 1 via its attorney, Deborah O. King. It has a court date on Sept. 23.

Located at the former spot of the City Cafe, the restaurant was "an upscale fine dining restaurant" that at one point was to be called 54 Wine Bar & Bistro according to threads on Louisville Hot Bytes. According to another post on that message board, "The rumours I heard going around about that place is that the owner was some kind of mobbed up drug kingpin from Miami that had no business trying to open a restaurant." 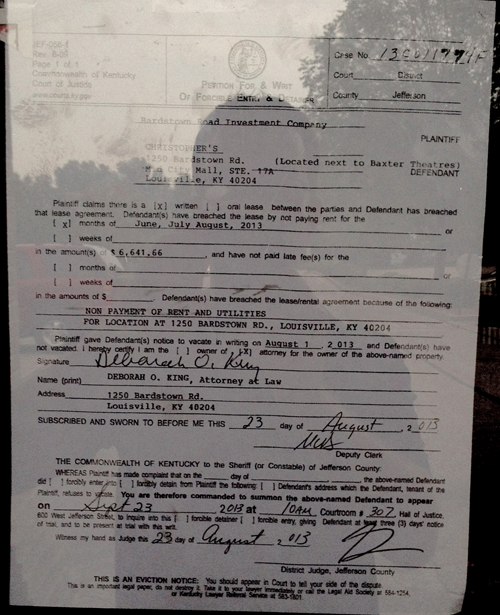