Share All sharing options for: Banh Mi Hero's Lee Tran on Year One

Welcome to One Year In, a feature where Eater chats with chefs and owners of restaurants celebrating one year anniversaries. 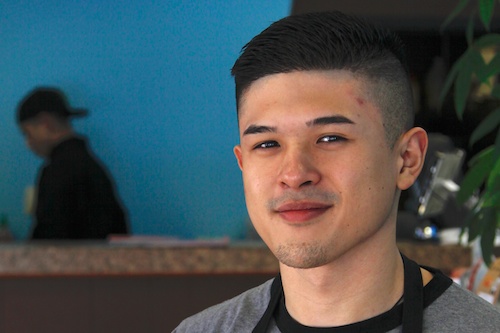 Lee Tran just turned 21, and in addition to being able to enjoy legal alcohol he's celebrating one year in at his restaurant, Banh Mi Hero. Serving "both traditional and innovative Banh Mì sandwiches … as well as Vietnamese Tacos, and Jasmine Rice served in cups," Tran began his restaurant after working in his mother's restaurant as well as giving real estate and college a brief try. Eater caught up with Tran on a cold, bitter midday at his Bardstown Road restaurant.

You were selling real estate?

Lee Tran: I enjoyed doing real estate. It was fun to wear a suit, until it was mandatory and I had to start doing it every day…that kind of sucked.

So you were in Sullivan, but not the culinary school, right?
LT: I haven't been back to Sullivan since March of 2013. I was taking classes in marketing. I've worked in restaurants for a long time, but I didn't know everything about the businesss end. That's what I went to school for…I kind of stopped going too early, but I think I picked up a few things.

When did you start cooking?
LT: My mom, she owns Annie's Café down in the South End … I was nine when she opened, and I started playing around in the kitchen, she didn't like it when I played with the wok, so every time I went near it she would to make me cook stuff I was kind of forced to cook as a kid, but then I started liking it.

This place doesn't look much like your mom's Vietnamese restaurant.
LT: I try to give my food a more contemporary taste. I feel like you have to change with the times. I really wanted to attract a whole new crowd that's not used to sitting in traditional vietnamese restaurants. Instead of having, you know, all the plants and trees and the, um, phoenixes and dragons and stuff, like what you're used to having, I just wanted to make something… you know, something cool. The neon was already here, but I thought it looked really cool.

What about those upside-down hats?
LT: This actually wasn't my idea. There's this really famous banh mi shop in Australia, they hang up Vietnamese hats, but they hang them right side up. I do it upside down. I thought it looked a little bit cooler.

What else do you differently than your mom?
LT: Instead of traditional stuff, I wanted to do the banh mis, vietnamese street fare. I also do wanted to do something innovative, that's why I do small soups to go with the sandwiches. Vietnamese, we usually eat soups as the entree. I also do fusion tacos, which you see in no mom and pop shop, that just became big in the last couple of years out of California, food trucks and whatnot. Our sandwiches different than other Vietnamese sandwiches because we cut and pre-marinate our meat. Plus traditional Vietnamese sandwiches, there are not to many of them, so I try to be innovative, try to make some of my own. I think traditional is good but it's not always better, so I like to to create something new. I'm just trying to change it up a little bit.

How's business?
LT: I have people from all over town, I have them from the East End, I have them from the West End, the South End, I even have a lot of customers from Fairdale that comes up here, you know… Up until about like September, it was going really well for me. I bought a food trailer two months ago, we're going to try and fix it up and launch it by the Spring. It's slowed down a little bit in 2013 winter. I see repeat customers, I'm expanding my menu in two months, I got five or six new sandwiches, five or six new tacos, I'm going to do soup specials every week and going to add few more rice items.

What's been selling?
LT: One of my most popular sandwiches which is the banh mi chai, which is tofu and mushroom and curry mix, my biggest influence on that was like a Thai-style yellow curry. I'm not too familiar with Thai cooking, but i don't believe they have any sandwiches, so what I did was I took some of their curry stuff, like their Penang curry and everything, and I turned it into a Vietnamese sandwich.

Anything new on the horizon?
LT: I'm going to do a ham hock, which is like a pig's ankle, it's a very traditional vietnamese sandwich. I think it's going to work out, because it's big in Vietnam, it's big in the Southern US, you know a lot of people eat ham hock. So I'm going to turn that into a sandwich. I'm also going to add jambon, which means ham in French but in Vietnam jambon is straight up pork jerky. I was watching Anthony Bourdain, he went to Vietnam and he had some of those sandwiches, and I thought it looked really good, so…that's something we're going to be adding on.

You started this restaurant with Graham Deason in the kitchen.
LT: Graham he he actually went back to Tennessee, went to Nashville. I'm now working with Kevein Ilano, I went to hight school with him, he also used to be a butcher in Kroger's for the past three years. Because we do cut and pre marinate our meat and because of our cold deli meats, I thought Kevin would be really good, because he used to be a butcher and so he's familiar with cutting a lot of meat.

Anything really throw you in your first year?
LT: When I first opened this place, my mom, she'd been in the restaurant business, so I knew a lot of her friends, people who worked for the newspaper, the local television company and stuff. So when I first opened up I had so much publicity, I had so much business, that it all went to my head. I didn't really take time to put myself into the restaurant. When everything started slowing down, you know after all the publicity and all the newspapers, that's when I realized I myself have to be in the restaurant at all times. I have to make sure everything is going right, and I have to continue working on my menu and continue to keep improving on my food. So that's what I've been doing for the last last you know seven, six or seven months. It's been bittersweet for me.

Bittersweet how?
LT: Bitter because I got less business. But it's made me realize that this is my brainchild, so I have to keep on working on it.

Any other surprises?
LT: When I first opened up I tried to keep it more traditional, by putting jalapeños in a banh mi… that didn't work, because not everybody liked really traditional, you know? Not everybody liked a lot of fish sauce in their pate, so I took the fish sauce out. I had to change the food up to meet my customers' needs. I've experimented around with shrimp banh mis, banh mis with anchovies, the ham hock I was talking about. I'm trying to build my menu, to give my customers something different. I want to have about 15 banh mis, but I don't want to overwhelm myself, give myself too much to handle.

What you think when you look over the past year?
LT: Everything worked out pretty good. Of course I had some miscues, and there was some unexpected stuff that happened, but for the most part everything worked out the way I thought it would be. It's a lot harder than I imagined. I knew it was going to be hard, I grew up in a restaurant, but boy, it's pretty hard owning a business… it makes you age, you know? What I'm really excited for in the future of this business is when I launch the food trailer, you know I think its really going to be awesome. I think mobile food is getting really popular, you know it's very trendy in Louisville, which I believe is a trendy city… especially in our culinary side of it.

What's going to be on the food trailer?
LT: We're going to sell banh mi, but I'm working on something else right now. It's kind of hard because it doesn't exist yet, and we can't do it in the restaurant because we don't have a deep fryer. I'm experimenting at my mom's restaurant. But once I get the food trailer ready I'm going to have Vietnamese french fries. On the West Coast they have like Korean kimchi on top of french fries with like pork or something, but they don't have any Vietnamese ones.