Share All sharing options for: La Coop's Bobby Benjamin on Two Years In 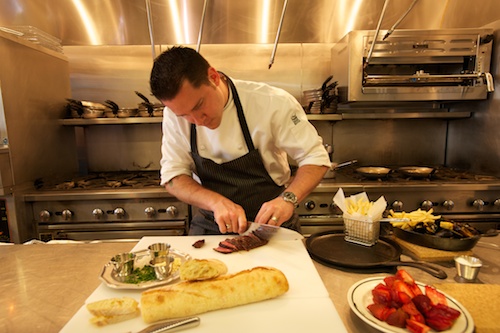 Bobby Benjamin left the Oakroom for the chance to head up his own kitchen in the environmentally-conscious Green Building. Eater recently asked Chef Benjamin about his past two years at La Coop: Bistro à Vins. His replies cover the challenges of a small restaurant, chicken and waffles in a French café, and a bit-too-intimate reaction to his pot de crème dessert.

How are things going after two years?
Bobby Benjamin: I think that things are going great! The city has really adapted to La Coop and been supportive of the direction we've taken the restaurant. They are enjoying French food and keep coming back. We continue to see a strong number of regular come back week after week because they share my passion for food.

Can you pick one word to describe the past two years?
BB: Progression.

Can you sum up the past two years in a couple of sentences?
BB: I've become a stronger leader and seen the restaurant grow so much. After becoming a partner in the restaurant, my relationships got even better with our team and our diners and I just keep learning more and more. It's been a constant progression.

What changed after six months?
BB: We had to get rid of lunch. It just wasn't working. With such a small restaurant, we had to turn away too many guests in a short time period. It was too much at once.

What changed after one year?
BB: After a year, I became a partner and our team got stronger as a whole. We were able to build our clientele of regulars and just keep building as a team. I started to focus on interacting with our farmers and integrating local food. Farmers like Brooke Eckmann, my heirloom tomato supplier from Ambrosia Farm, and Carol Friedman got me into the local scene to build those relationships. They have such a passion for growing vegetables and bring such amazing ingredients that I look forward to working with them now on an everyday basis.

What changed after two years?
BB: The biggest challenge was learning to adjust to a small restaurant. At the end of the day, every struggle or frustration came down to the size of the restaurant. Now that we truly understand that, we can take care of our guests better and give them what they crave. We have always been focused on our seafood program but it took a while to make it as strong as it is now. Like any team, you go through the first year getting to know each other and then the second year you build on that. Now, going into our 3rd year, we are really cohesive.

What were people's initial reactions to the menu?
BB: They've really enjoyed it from the start. Before we opened the doors, I wanted it to be a seafood-driven French bistro. We do a lot more seafood than other restaurants in town which I think surprised a lot of people. The menu is a bit different from the traditional bistro.

How have people's reactions changed over the past two years?
BB: People rely on coming in and ordering the special now. They want to know what the Thursday Burger is; they want to get the fish du jour. At this point, they trust me. If I do something off-the-wall like chicken and waffles, which is pretty uncommon in a French bistro, it will sell out because they are so willing to try new things. I have been able to push myself as a chef and push the guests to try different things. We never expected the chicken and waffles to be such a big hit – we sold 30 orders in a day. People come back asking for it and it's exciting to see that they want more from us. Part of that success goes outside the kitchen to our entire La Coop team. It starts with our servers presenting the dishes. It's what they do that makes me able to do what I'm doing. If they can't pitch it well, it won't sell – even to our regulars. As a team, it's been really nice to be able to trust in what we can do together.

Were there any initial criticisms?
BB: At the start, some people criticized our bone-in offerings. It took a while to adjust to serving coq au vin or fish dish with bones in it.

What was something you failed to anticipate?
BB: I didn't realize how many people we'd have to turn away because the size of the restaurant is so small. I hated seeing that happen because as a chef, I am driven to make the guest happy.

What was your most pleasant surprise?
BB: The reactions to the restaurant came so quickly! I was absolutely thrilled to be welcomed the way we were, to win [Louisville Magazine's] Best New Restaurant in our first year and to see that positive feedback from our guests.

Can you describe the oddest customer experience of the past two years?
BB: Once a woman jumped into the kitchen and hugged me after eating the pot de crème dessert. I swear the only thing she didn't do was tear my shirt off!

Can you describe your most rewarding moment of the past two years?
BB: Winning Best New Restaurant was really validation that we were doing the right thing and everyone was on board. There are so many restaurants putting out great food and that showed us we were on the right track.

What are some of the most popular dishes?
BB: The pecan salad outsells everything on the menu. People just love the way it comes together with the bleu cheese ice cream on top. We also have a lot of people who come in for the escargot because there aren't a lot of other places you can get it in Louisville. The short ribs and fish du jour are the most popular entrees and we always get rave reviews for our bananas Foster bread pudding and pot de crème for dessert.

Have customers declared any dish a "must-have"?
BB: Just last weekend, I had a group of ladies on a food tour that tried the bread pudding and just went nuts over it. They were taking pictures and telling me that they 'don't even like bread pudding' but it was one of the best desserts they've ever had. Someone told me that our duck confit dish was the 'hidden secret' on the menu. It's inexpensive and not the sexiest item but they just love how good it is.

Is there any dish you wish you could take off the menu, but can't due to popular request?
BB: Yes, the short rib. I wish I could do more with it like make it lighter in the summer and play around with it but I can't. As a chef, I want to serve something that matches the season but they'll sit outside on the patio in 90 degree weather and eat these hearty short ribs.

How has your part of Market changed over the past two years?
BB: It's definitely growing and getting even better. This street has a lot of great chefs – at Decca, Rye, Harvest, Mayan Café and others. The whole community is really busy in the spring and summer – you can barely walk down the sidewalk! It just keeps growing to become a stronger attraction because there is so much great food on one street.

How is the Green Building holding up, energy-wise?
BB: It's a gorgeous building and I enjoy walking in every day. I think it's doing well and people really respect it.

Are there any particular challenges or adjustments necessary to work in an energy-conscious environment?
BB: Our kitchen is really hot in the summer and really cold in the winter. It takes a while to get the place heated in the morning, even though it's small. Also, it's a 50-yard dash to the walk-in.

Anything you would have done differently?
BB: I wish that we would have opened without lunch. People have perception that if you get rid of something, you're failing. If only 10 thought that, that's 10 too many.

What are you looking forward to in the coming year?
BB: I am working on adding more daily specials to the menu. We do a burger every Thursday and are planning to add the chicken and waffles on Wednesdays, a seasonal fish dish on Fridays, a New Orleans BBQ shrimp dish on Saturdays and are talking about even more that we'll add in the next couple weeks.

What advice would you offer someone else thinking about running a kitchen?
BB: I would say it is not a job and it's not a career, it's a lifestyle. If you can focus your lifestyle on running a kitchen for 5 years, it will only get easier. You have to teach and you have to delegate.

Has it felt like it's been two years?
BB: Yes, it definitely has. It's funny because my sous chef thought it was 3 years because time has gone by and a lot has happened in a short period of time. It's been going well but I see a lot of difference between our team now and when we opened. They're more passionate and driven and committed. We have more fun now than we ever have. The front of house is great. You can joke around and everything still gets done right. We all know our standards and we're all excelling.
· La Coop: Bistro à Vins [Official Site]
· All Eater La Coop Coverage [~ELOU~]