Share All sharing options for: Manny & Merle's Tony Palombino on 18 Months In

Welcome to 18 Months In, a feature where Eater chats with chefs and owners of restaurants celebrating significant anniversaries. 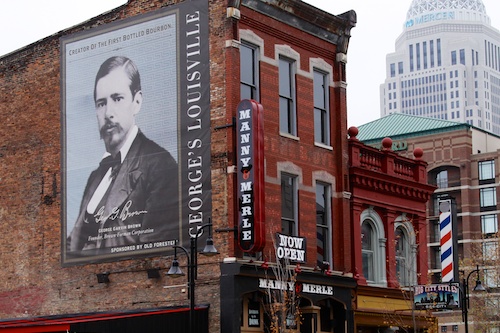 Tony Palombino may be best known as the man behind Boombozz Pizza & Taphouse, but in November 2012 he opened a "toe-tappin, taco-slinging honky-tonk on Downtown Louisville's Whiskey Row" called Manny & Merle. Eater spoke to Mr. Palombino recently about Manny, Merle, music and more as the restaurant/music venue approaches its second year in business.

What was the origin of the Manny & Merle concept?
Tony Palombino: Besides having a passion for pizza, I have an incredible passion for music. I always wanted to be an opera singer. I was in a few bands, things like that. So this location winked at me. Several times. And when it became available, just by chance, I had no idea what I was going to do with the location. In my travels, especially when I started traveling, I spent a lot of time on the West Coast, especially Arizona, and I started seeing the honky-tonk trend, with the food aspect to it and live music. I'm a big fan of Nashville, and so every time I went to Nashville I was going to Tootsie's, it's right on the main drag. It's a shotgun building, and if you look at it it looks just like Manny's. Brick, old, big stage. It had a food program, so I'm thinking, "Perfect." It was the perfect opportunity to do something downtown.

Did you consider doing a pizza place in that spot?
TP: As soon as the word got out that I was involved in that building, people started saying I was going to put in a Boombozz. I remember telling some of the media outlets: "Forget about me talking about Boombozz and our success so far. I love the fact that people think we're good. But I would never… It would be injustice to open a pizza shop across from Bearno's and Impellizzeri's and Devino's. You want to put in ANOTHER pizza shop? This area deserves better." That's the way I saw it. I'm not going to put in a pizza place because I think Boombozz might conquer the world down here. I wanted to do something completely different.

How did you settle on Mexican food?
TP: When I started doing research on honky-tonks, the research showed that the food really came out of Hispanics in the kitchen. So the "Manny" is really for Manuel, one of my best employees, who had already done Mexican concepts before with me. Then we had "Merle," which is the music, and that's how those two came together.

How involved have you been with the restaurant?
TP: I do all the bookings for the bands because I enjoy doing that, but that's getting a little out of hand. I couldn't even book a band when we first opened. Now I get CDs every week, and that's cool. So I enjoy that. Also, I designed the whole thing from top to bottom. No architects, just walked in and said "things go here."

How have things changed over time?
TP: Every new concept you do, it's going to evolve. The music was only going to be a band here, a band there, on Friday or Saturday night. But the gravitation to the music was huge. So I expanded the music to Thursday, Friday and Saturday, and started to bring in more acts from Nashville. But then we started focusing on local bands. That's been huge for us. So we tend to book a nice rotation of local musicians. That's what has evolved mostly is the live music. We noticed that the music was evolving within two months.

How has the menu evolved?
TP: We had a little bit of a learning curve there. In April of last year, I went in and revamped some things, did some things a little differently, and that helped tremendously. This was one of the first concepts I've done where I wasn't really in charge of the kitchen at the beginning. Like me in the kitchen, saying I'm going to develop a menu and make sure it's executed right. If I had to fault anything, I fault myself for that. It was the first time I let someone say hey ok you do your thing. I went in in April and changed personnel, and got back to basics. If you're going to make guacamole, it can't just taste like avocados. So I revamped the menu, and it's got its legs now.

What dishes work best?
TP: Green chili pork tacos. We house-roast all our meats, and we utilize a garlic aioli and green chili jam and roasted pork. If you look at those ingredients, and you look at the Boombozz menu, you'll find green chili jam. So these flavor profiles are crossing over between the brands. And again, a taco, like a pizza crust—you can put anything you want in it.

What's the clientele been like?
TP: It's been a pleasant surprise. The bar business is unique, especially when you have alcohol involved and live music. But you know it's been great, the crowd has been really good down there. The out-of-towners, the conventioneers, they have been great supporters. But nothing too crazy, you know?

What's it been like being downtown?
TP: Steve Poe's hotel [an Aloft Hotel planned for the corner of First and Main]. The arena events have been growing. The games are the games, that's a no-brainer. Eventually what's going to happen across the street. We're very excited about what's going on downtown. That's why we made the investment, because we believe in the long-term growth there.

Thoughts on the first year or so?
TP: It's gone by so fast, it really has. Of all the projects I've done, this has been very, very exciting to do. I've really enjoyed it. It goes back to being able to being involved in music, being able to talk to musicians. Just seeing a musician who's struggling to get on the scene, and you give him a chance. It's just like the guy who wants to make a career out of the restaurant business. He starts out as being your prep cook, and now he's the manager of your store.

Plans for the future?
TP: We're real excited for the potential growth. We exceeded our expectations in sales, and we need more seats now. We are planning on adding at least 60 more seats, by the summertime I hope.
· Manny & Merle [Official Site]
· All Eater Manny & Merle Coverage [~ELOU~]