How Annie Pettry Arrived In Louisville

Share All sharing options for: How Annie Pettry Arrived In Louisville 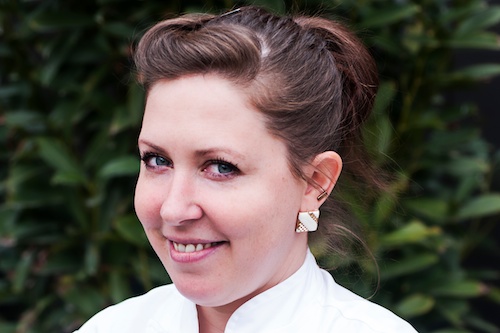 Annie Pettry has firmly established herself as one of Louisville's strongest chefs. Her work at Decca has won Cochon 555 as well as earned recognition from Starchefs, Food & Wine Magazine and more. Eater interviewed Pettry recently at Decca's upstairs bar, and began our conversation with the tale of her arrival in Louisville—a place she had never visited before she began working at Decca.

So, you're originally from North Carolina and you went all the way across the country to San Francisco?
Annie Pettry: Yeah. I went to San Francisco in I think 2001. I'm kind of bad with exact dates. I was there for about six years and that's where I said I was going to cook for a living. I decided I had to live in New York City if I went to culinary school.

What school was it?
AP: The French Culinary School, which is now the International Culinary Center. I lived in Brooklyn and commuted into SoHo every day and it was really fun.

You got a job?
AP: No, I didn't have a job when I moved back there. My sister was there and I went to stay with her, but I didn't have anything set up. When I went out there I got in touch with Loretta Keller [of COCO500, The Moss Room and Seaglass Restaurant], and she hired me. I was working for her and she was consulting on this project. And so that's how I'm here.

You decided to come to Louisville without even one visit?
AP: Loretta approached me with the Decca project, and it was too big to pass up. I mean I read about Louisville and it looked great on paper. There wasn't time to visit. It was like "we're opening in March" and I had a couple of weeks to get here. Then we had six weeks to open the restaurant so it was crunch time. There wasn't time to visit. Louisville is like six hours from my hometown and I would be within driving distance of my family. I felt like maybe it would be similar seasons here so I thought maybe that would help.

That takes a brave person.
AP: I guess I'm that person. When there's a challenge or an opportunity, I'm going to take it. I mean, I thought about it because I loved San Francisco. I was able to move there again and I'd only been there a little while, like only a year, so that was tough. But someone says hey, we're opening this restaurant and you get to be the chef. And you get to hire all the people and you get to do all the food. You get to build the culture of it and you can do whatever you want. And we're going to get you here and pay you and it's going to be exciting. I had never done that before. So yes, yes of course I'm going to do that. Why would I say no to that? I can't imagine passing something like that up. That's pretty much what it is. Just challenge accepted.

So does Louisville seem similar to North Carolina?
AP: The southern thing. It's not really like the southern that I'm used to at all.