Annie Pettry On Two Years In At Decca

Share All sharing options for: Annie Pettry On Two Years In At Decca 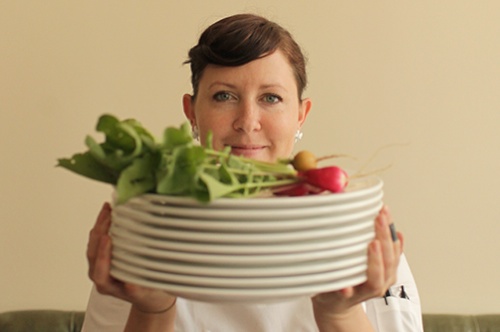 Annie Pettry has firmly established herself as one of Louisville's strongest chefs. Her work at Decca has won Cochon 555 as well as earned recognition from Starchefs, Food & Wine Magazine and more. Eater interviewed Pettry recently at Decca's upstairs bar to see what she thinks about the past two years.

Could you pick one word to describe the past two years?
Annie Pettry: Whirlwind.

Can you sum up the past two years in a couple of sentences?
AP: The past two years have been a whirlwind of activity. My main goals have been to create a culture within the restaurant where the staff and our guests feel inspired and nourished with great food and hospitality. All of the extracurricular things that have happened for me (winning Cochon, Rising Star Chef and Food & Wine The Peoples Best New Chef) have been a surprise and an honor that I hope will further inspire our staff and guests.

What changed after six months?
AP: Our first summer was wrapping up and I felt like I had more of a connection to the community here in Louisville, especially with the amazing farmers and artisans I had been buying from all season. Oh, and I finally knew what Oaks meant!

Any other adjustments?
AP: Well, the first couple of months we were having the servers verbally fire tickets and that's changed to firing into the computer. That's sort of a little thing, but it made a huge difference so the servers aren't really in the kitchen except for when the bell rings to pick up food. That's helped with the flow of the restaurant and making sure that everyone in the kitchen is focused and not in there chatting or hanging out. I verbally call all the tickets to all the stations, so if there's people in there yapping that can interfere with that. We have like a call and call-back system so nobody's looking at tickets besides myself. But except for the firing, that hasn't really changed.

What changed after one year?
AP: Our staff had formed a tight knit bond and I started to see the culture we had been building start to solidify. Our guests were more trusting that they were going to have a great meal and a great experience when they came to eat here.

How did people react to the menu at first?
AP: Most people had a very pleasant reaction. However, there was a huge learning curve with our middle/pasta course on the menu. It was a new concept for quite a few. People expected a large or entrée sized portion. Maybe they wanted an endless pasta bowl?

Have the reactions changed?
AP: I think so. Many people now come here just for the pasta, and they know that it's a great size to share as a mid-course.

Were there any initial criticisms?
AP: Common criticisms are that the tables are too close together, and that it's loud.

What is something you failed to anticipate?
AP: That it would be hard to find staff. I thought when I moved here it was going to be a little easier. I have a great staff, but it's not like we put an ad out and people are knocking at our door. You put an ad out and like two people give you a resume which is really surprising to me coming from really competitive restaurant environment like San Francisco where it's really hard to find a job because there are so many other candidates.

What was your most pleasant surprise?
AP: That most of the kitchen staff is now conscious of where their food comes from. They stopped drinking energy drinks and fast food and now shop at farmers' markets and health food stores! The most common topic of conversation in the kitchen is about the food system and how to improve it.

Can you describe the oddest customer experience or request you've had in the past two years?
AP: We had a guest who made a reservation and said she could only eat pomegranates, pears, olive oil and sweet potatoes. I was up for the challenge, but she ended up canceling.

What was your most rewarding restaurant moment of the past two years?
AP: When my team and I won Cochon Heritage BBQ!

What have been some of your most popular dishes?
AP: Kale and brussels sprouts salad. Wood Grilled Asparagus.

What advice would you offer someone else thinking about running a kitchen?
AP: Continue to challenge and educate your staff. Keep it clean. Pay attention to the front of house too. Your restaurant is more than just the kitchen.

Does it feel like it's been two years since you've arrived?
AP: It feels like an eternity that went by in the blink of an eye.

What are you plans for the immediate future?
AP: Changing the menu for spring and gearing up for our patio season. Also, I'm taking a quick trip in April to Hong Kong and Vietnam to meet my sister. We've always dreamed about going to Asia in general. She just graduated from college at Chapel Hill and she's doing this huge like summer traveling. So I'm going to meet her.

What do you plan to do when you're there?
AP: I'm going to eat everything in my sight, pretty much.